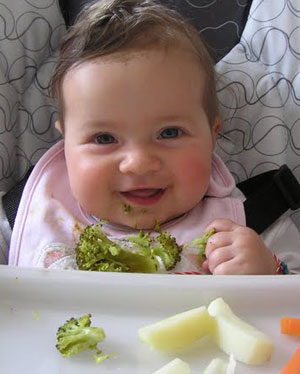 When Charles Clarke, dad to 7-month-old C.J., saw another babe at his son’s playgroup munching on a slice of squash, he was impressed. “We’d started giving C.J. purees at 4 months, but purees became very time-consuming to make,” says the Atlanta dad. After asking about the method, known as baby-led weaning, Clarke was curious. “I’d always wondered if C.J. could just eat whatever we were eating but thought it sounded far-fetched to just give it to him and watch him figure it out on his own.”

Clarke’s not alone in his thinking. A 6-month old needs help to start solids; you can’t just set food in front of him and let him feed himself.

Read the rest as originally published in Parenting.