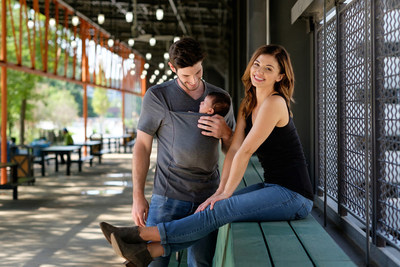 In 2013 Lalabu created the Soothe Shirt, an innovative babywearing shirt that’s both a nursing tank for moms and a cozy carrying pouch for newborns. Unique because it requires no wrapping, adjusting, or tying, the Lalabu Soothe Shirt makes babywearing simple for new moms. Since 2013, Lalabu has sold over 15,000 Soothe Shirts and donated to over 600 women entrepreneurs in Africa through their 2{0eb308fd4b647f25406e5668194833f4a52138de9c468ddf4139c2d52e01c910} for moms giving model.

Now, the Lalabu Dad Shirt brings the babywearing experience to dads. Designed specifically for men, the Dad Shirt has an integrated pouch that helps dads bond with and calm their newborn. “I felt left out when my babies were newborns, because there weren’t babywearing products designed for me,” says Brian Fosse, Lalabu co-founder and father of two. “The Lalabu Dad Shirt makes it easy to win as a new dad.”

The Lalabu Dad Shirt is currently available for discounted pre-order through the crowdfunding campaign on the Lalabu website. The crowdfunding launch coincides with World Breastfeeding Week and also includes a new updated version of the Lalabu Soothe Shirt for moms. Both shirts will retail for $75 and will begin shipping October 2016.

For more information, visit the crowdfunding campaign at http://www.lalabu.com/launch.